I believe that play is how children learn about the world around them. This belief has come from reading many theories of how children learn — everything from Piaget to modern day theorists, from research studies on the topic, from observing children through my work and from watching my own son just naturally interact with his world. The United Nations Convention on the Rights of the Child names play as a universal right for every child. I believe it is a right of every child and that we as parents, teachers, and grandparents should do our best to encourage play and protect children’s time to play.

Play may look simple, but it is incredibly complex and that complexity has made it a difficult thing for researchers to study. There are many benefits to play — more than I can name here. This list represents the types of play that affects a child’s development in deep and meaningful ways and that is also backed by some research. For each one, I also give quick tips on how to encourage that kind of play.

1. Play Leads to Discovery of the Physical World (Physics and Math):

Piaget developed his theory of cognitive development primarily through careful observation of his own children. While not everything Piaget proposed has been supported, several of his ideas have stood the test of time. One his ideas which has been supported is this:

“Each time one prematurely teaches a child something he or she could have discovered for himself, that child is kept forever from inventing it and consequently from understanding it completely.” – Jean Piaget 1970.

Piaget noticed that when his children played they were discovering things about their world and in so doing, developing a deep understanding of the natural physics and mathematical principles of our world. Piaget called this constructive cognition. He believed children were active agents in their own learning. In other words, learning isn’t something that happens to you, it is something that you do. In this sense, the act of learning is an activity and for children that activity is play.

If we step in and show our children how something works or do it for them we take aways that first joy of discovery. Yes, we can guide children and help them, but our role is to take a step back and let them do as much as they can on their own. Some frustration is expected and perhaps necessary for them to solve the problem.

As children naturally observe, sort, measure, compare and manipulate objects they are building basic science and math skills. In one longitudinal study, LEGO performance during the preschool years positively predicted performance on standardized tests in 7th grade as well as a number of higher level math classes taken and grades in those classes in middle and high school. What is really interesting is that LEGO play (and in other studies block play) did not predict math ability in elementary school, the relationship only became significant later on. I would guess because they still need to be playing in elementary school! This natural exploration of the world is the basis for creative problem-solving ability. Even babies are manipulating objects and doing little physics experiments.

Quick Tip: So, what can we do to encourage this type of play? First, provide materials like blocks, building toys, water, sand, play dough, natural materials, wheels, etc. The key for this kind of play is that the materials are open-ended and that they can be combined or sorted or manipulated through movement or actions.  Second, take a step back and watch their discoveries! This kind of play can take place outside with sticks or in the bath with a few cups, it’s more about taking a step back than anything else.

This one really leads off of the first point– as children discover their world through play they also are developing the ability to problem solve. Think of a young child trying to connect two trains with magnets. The trains have a positive and negative side. We can step in and show them how they connect, but if we let them learn through active discovery they begin to truly understand how it works. They learn that when the trains face a certain way they connect. They also start to classify trains. You’ll notice that they begin to make fewer mistakes when the trains have a clear front side, but with train cars without a clear front, they still have to try both ways.

These discoveries involve observation, comparison, classification, and trying different ways to solve the problem. These are all real-world problem-solving skills! In one study, children were given sticks and a marble to play with. Half of the children were allowed to play with the materials and the other half were trained on how to join the sticks together to retrieve the marble. Children with training experience directly relevant to the task performed as well as children who simply played. However, when the researchers asked the children to solve a second problem which required joining 3 sticks together and more innovative problem solving, the children who played were faster and needed less hints to solve the problem than those with training experience.

In other words, just letting children play with the materials lead to better and more innovative problem solving than did specifically teaching them how to solve the task.

Quick Tip: To encourage this kind of play it is important to take a step back and let kids discover, manipulate and explore. I am always amazed at how children problem-solve, their solutions are so creative and usually something I wouldn’t have tried myself — and that’s a good thing. Divergent thinking declines with age, we want our kids to hold onto as much of it as possible. The second tip is to make sure your kids have independent playtime. One study showed that active solitary play leads to the highest levels of divergent thinking in preschool children. So, while social play is incredibly important, so is playtime by oneself. 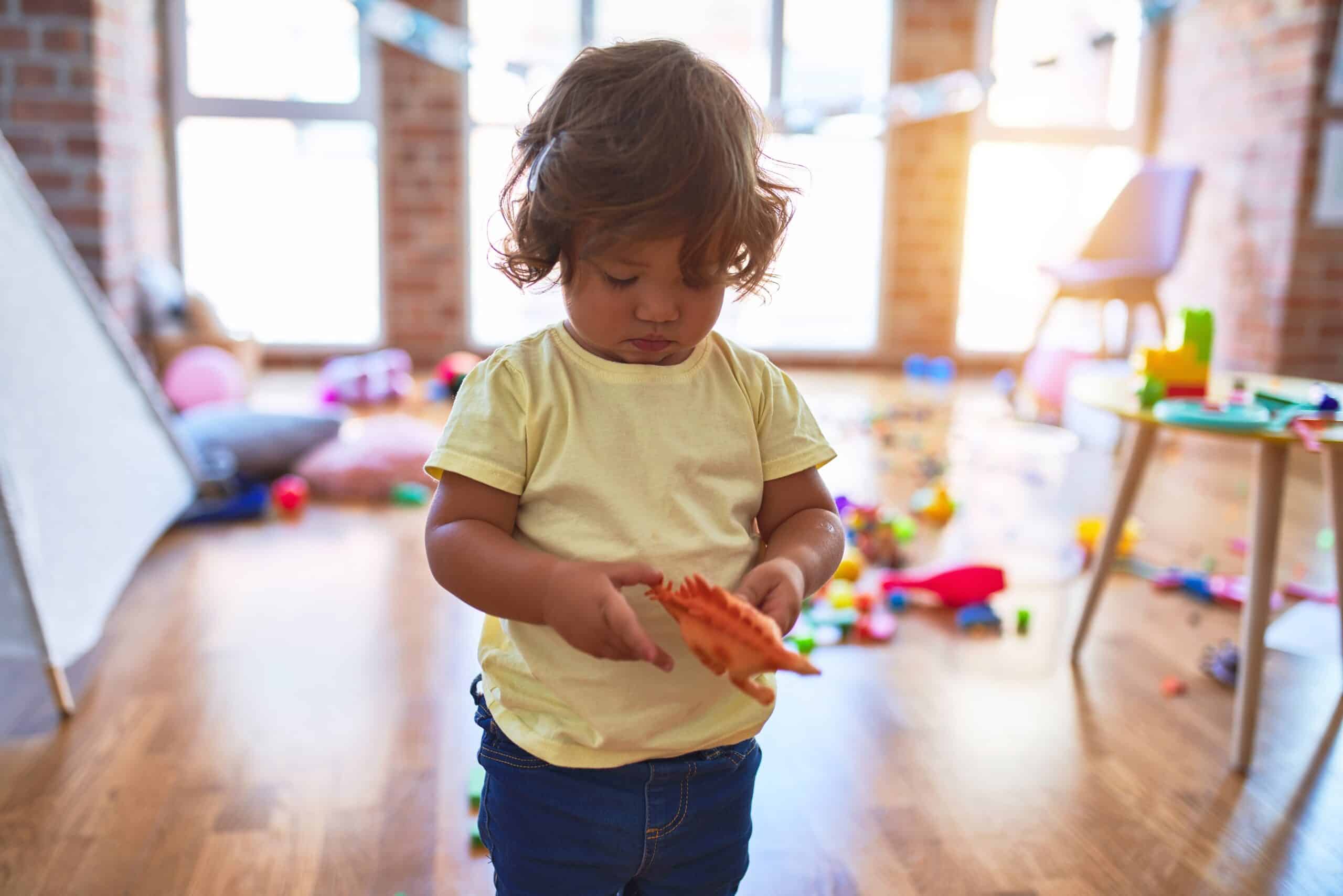 This can occur in a few ways. First, social play in which a few children play a game together and make up a pretend scenario is a natural environment for children to learn and practice self-regulation skills. When children work toward a common goal they have to regulate their impulses in order to cooperate. Children who are more impulsive especially benefit from this kind of play. This is also how children learn about social rules like sharing, negotiating, resolving conflicts and how one must act in a group to get something done. Cognitive self-control, otherwise known as focused attention, also develops during playtime both with other children and independently. For more on increasing attention with play read my post here.

Quick Tip: To encourage self-control through play it is important to have playtime with other children on a regular basis. I have noticed that cooperative play in younger children happens more often outside away from the distractions of too many toys and other things. Once they run around and burn off some energy they will start playing restaurant with mulch or castle on the playset and all of a sudden they are truly engaged with each other.

For us, preschool was a great way to have my son be able to meet up with the same children in the same environment on a consistent basis. When the toys are the same and the children are the same, truly cooperative play can develop over time. One of the things we specifically looked for in a preschool was A) unstructured playtime as a part of the daily routine and B) that all learning occurs through play situations.

The research on children is limited in this area, but with adults, we know that physical activity/exercise is related to greater physical health, reduced mental stress, and is a buffer for depression and anxiety. This is true for teens as well. It follows that physical play in children would have similar effects. Physical activity play in preschoolers is called physical exercise play and in middle schoolers rough and tumble play. Basically, both of these types of play involve large body movements and exercise.

The cool thing is that kids are naturally motivated to exercise in this playful way. Most likely, physical play helps children develop strength and endurance. Moving their bodies gives input to their developing brains and bodies. It is also likely that children experience a stress release after physical play, in the same way that adults do after physical exercise.

Quick Tip: To encourage this kind of play, go outside! Research shows that children with impulse problems and ADHD may especially benefit from greenspace play. Also, if you notice your child has anxiety or lots of excitement try a bit of old fashioned horse play. A little running around, hide and seek, and flipping them over will change that tenseness into giggles. This works especially well with high-energy children. I find that if my husband rough houses a little when he first comes home it helps my son reconnect with him, reduces negative feelings related to separation and burns a little extra energy during the witching hour!

Play is really how children interact with their world and how they communicate. To connect with them we need to tap into our playfulness as adults. Bonding with children though play can happen in many ways — directly playing with them and immersing yourself in their world will promote a closeness and trust with them, injecting playfulness into routine activities can gain their cooperation and is also make daily life tasks a little more fun, and some rough housing can encourage physical connection and stress release. In a clinical report from the American Academy of Pediatrics they discuss the importance of play in promoting child-parent bonds:

“When parents observe their children in play or join with them in child-driven play, they are given a unique opportunity to see the world from their child’s vantage point as the child navigates a world perfectly created just to fit his or her needs.”

Quick Tip: When you are struggling to get through to your child, try being playful. For more on this check out my post on How to Get Your Child to Listen and this wonderful article from Dr. Lisa Markham at Aha Parenting Playing with Your child: Games for Connection and Emotional Intelligence. For more ideas on connecting through rough and tumble play, I highly recommend (affiliate link) The Art of Roughhousing

by Drs. Anthony T. DeBenedet and Lawrence J. Cohen. I love this book because it is a basically a manual for ways to roughhouse organized by age and risk of the moves. My husband and son use this book weekly, if not daily!