The Developmental Benefits of Pretend Play and How to Encourage it 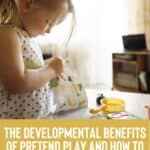 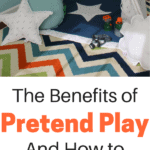 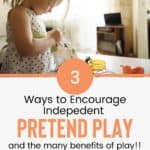 At my son’s four-year well-visit, the nurse mentioned that he wouldn’t have to have any more shots until he was 11, except for the flu shot. But she quickly assured him he wouldn’t need that shot until the fall.

For weeks after that appointment, my son was asking “When would it be Fall?”

I knew he was thinking about that flu shot. We talked about it. I tried to reassure him, but nothing really helped. Until one day he got out his doctor’s kit and informed me I needed a flu shot. I played along. He said: “Sometimes you get things in your arm and you have to get a shot to flew it out of there!”

After playing this scenario a few times on me and on his Dad, he forgot about the flu shot and didn’t mention it again. And when the time did come, he said: “That wasn’t as bad as I thought it would be!” The next year, it was no big deal at all!

When children have stress or a problem, talking about it only goes so far. Children learn through play. Pretend play and role-play are especially good at helping children work through problems, stress, or anxiety that they may be feeling.

That is one of the more obvious benefits of pretend play. Pretend play or imaginary play allows children to practice at life.

Whether it’s something they are worried about, testing social boundaries, trying out different social roles, or practicing self-regulation skills.

Play is a child’s way of solving life’s mysteries and gaining a sense of the world around them.

It’s also something that lasts throughout early childhood and beyond. Research shows that pretend play will last until about the age of 11 (1) and in our technologically rich and over-scheduled world, it’s our job to make sure children have the time and space for this kind of play.

The Importance of Pretend Play For Child Development

One study looked at the relationship between pretend play and executive function skills (all of those skills that help with behavioral and impulse control, and emotion regulation).

In this study, preschool children were randomly assigned to one of three groups: a pretend-play group, a standard-play group, and a business-as-usual (school-work) group.

At the end of 5 weeks, each of the groups was tested on a series of executive function tasks. The pretend play group showed the biggest improvements on the working memory task and flexible thinking task, there was no difference between the groups on the inhibition task.

Children who were the most engaged in the pretend play and who had the wildest fantasies performed the best on the working memory task.

The best part? Children do this so naturally. Really, they don’t need much from us to do play — they are driven by their own curiosity and need to explore their world and learn.

Three Ways for Parents and Teachers to Encourage Pretend Play

Developmentally, young preschoolers are capable of pretend play and the type of play called dramatic play. Start even before that age — give your older toddler a few things that might spark their imagination and let them explore and play on their own for a short time.

Getting younger children used to independent play lays the groundwork for immersive pretend play later on.

You can start with a smaller amount of time and build up, but even young children can play independently and that is when you see a lot of imagination at work. I talk about this and time for play in my post on quiet time and setting up quiet time boxes.

2. Give Your Child Time for Pretend Play

Our children are so overscheduled. When was the last time your child had enough time to really immerse themselves in freeplay?

When we meet other children at the park, the first several minutes consist of just wild running. Eventually, a story develops. Perhaps, it’s jumping over lava or a secret spy agenda, but something emerges from their play.

It takes time for the roles to develop and the play to unfold. That kind of role play — when it consists of a story, is where children practice life skills and social skills.

The same is true at home. When you are rushing from one thing to the next or expecting your child to be able to engage in deep play after watching TV, it likely won’t happen. You have to build time for it in your schedule.

Once my son dropped his nap, we started quiet time For a while, this was the only time at home that my son would really get into his imaginary worlds. Now he can generalize to more situations, but in the beginning, he needed that quiet part of his day that was consistent to really let his imagination grow.

Read more: Tips for Starting a Daily Quiet Time Habit With Your Kids

Now that he is in school full-time, that play happens after school. After snack and reconnecting, it sometimes takes me getting on the floor with him at first, but then his imagination takes over and he plays.

When you think about the kinds of toys to buy your child, stay away from active toys that do everything for your child — toys with buttons, directions, lights, music. Instead, lean towards passive toys that will allow your child to create.

This is why a cardboard box is so intriguing — it can be anything! We have one that hangs on a hook in our garage when not in use that has literally been around for over 2 years now!

Read More: The Book List That Will Spark Your Child’s Creativity and Independent Play

Other kinds of toys to have on hand would be anything that sparks imaginative play — dolls, trucks, dress-up clothes and costumes, space toys, castles, forts, and building toys.

The key is the toys are open-ended — they are entertainment. And it doesn’t have to be anything fancy! Some of the best play comes from cardboard boxes and other recyclables.

How to Create a Playroom That will Grow with Your Child

The Most Important Life Skill to Teach Children: Self-Regulation
Next Post:The Science of Kindness: How to Raise Kind and Joyful Kids with The Kindness Elves