How To Help Your Angry Child: 4 Anger Management Strategies for Kids 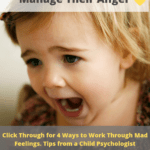 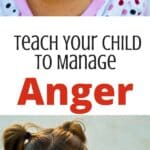 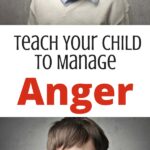 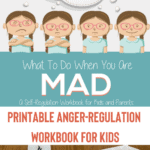 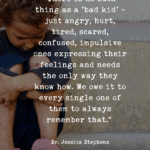 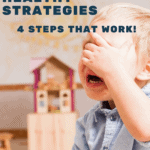 Inside: Is your child angry? The problem is not the emotion itself, but how your child learns to express that emotion. Teach your child how to manage their anger in healthy ways. The solution is healthy anger management.

Honestly, I can’t remember what the situation was — but I do remember the look on my son’s face.

His jaw was clenched, his fists were clenched, and he was literally shaking. He was MAD, really mad. And this wasn’t like the tantrums you see at ages 3 and 4, this was -blown adult-like anger. I say adult-like because as much as I hate to admit it, I recognized that look.

In fact, I knew exactly how he felt. I have a temper too, my husband not so much. So, reluctantly, I’ll take credit for this one (and in fact, there is a strong genetic component to anger) (1).

The Development of Anger in Childhood

Expression of anger typically increases from ages two to five (2), as seen in those all too common toddlerhood tantrums. From the ages of three to six anger typically decreases and levels off (3).

As self-regulation skills come online and mature, the need for tantrums decreases. Just think of a 6-year-old getting mad as opposed to a 3-year-old, the older child will be better able to handle situations and emotions due to developmental maturity.

Yet, the 6-year-old still gets angry and in some ways, this anger may be deeper than before — more meaningful. It will be linked to social relationships, hurt feelings, and perhaps anxiety — complicated feelings they didn’t have at age three. This is the beginning of a more adult-like temper.

Looking for anger in toddlerhood? Check out my post on Toddler Defiance: Toddler Defiance and the Brain: They Know Better, But Can They Do Better? (yes, but they need help)

So what was my response to this anger I saw in my son? I murmured something vague about “not being nice” or “not saying nice things” and later, I self-reflected and came up with some strategies that would actually teach him to work through his big feelings.

Healthy Anger Management for Kids: Four Steps to Working Through It

Step One: Make it Concrete and Specific

Vaguely saying something about not saying nice words or not being nice wasn’t effective at all (to say the least). I realized I wasn’t helping him to identify his feelings on a concrete level.

Be as specific and concrete as possible to help them identify the signs of anger. Later you can get to the “why”.

The first step to anger management is to be mindful of what is happening in the body. Recognizing the signs of anger (e.g., clenched fists, tight chest, etc.) is the first step to stopping it.

The next time my son was angry, I was prepared. On our drive home from school one day, my son told me about something that happened that made him really mad. He was still upset and angry about it. I taught him a strategy that will help him understand his anger in a concrete way.

“It sounds like you got really angry. I get angry like that too sometimes. I can see your body shaking because you had so much emotion built up inside. It’s like a steam engine. What if the smokestack of a steam engine was blocked, what would happen?”

My son: “It would build and build until it wanted to explode!”

“Yes, it would. Is that how you feel? Like you have so much anger inside you could explode?”

“What do you feel like doing when you have all that steam inside?”

My son: “I want to hit something!”

“Yes, I know, it feels like you want to let that steam out. But when we have all that steam inside, that is when our control panel is turned off in our brain and we make unwise choices. Instead, we have to think of other ways to let out the steam without losing control.”

This exercise is in my new anger management workbook for kids! I use science-backed information to help your child understand their anger, identify signs of anger, learn to vent anger in healthy ways, and refocus their “mad energy.” Get your printable copy today!

We use the word “control panel” to refer to my son’s self-regulation center in his brain. This is something we often refer to — e.g. “Seems like we forgot to turn on our control panel.”

This is a way to teach children how to think about their own thought processes in a concrete way as well. We give both the emotion and the regulation of the emotion concrete imagery.

It is important to define the “unwise choices,” even with kids who already know better, it is a good idea to lay it out.

Even though we accept our child’s emotions and we help them recognize their feelings, that does not mean we accept their behavior. It is important to differentiate between the emotion and the behavior. If your child acts out on anger by lashing out, you need to define the limits.

Practice saying this with your child:

When I am Angry and I am full of Steam, I need to vent my steam.

When I Vent I will…

Keep my hands and feet to myself.

Keep angry words to myself.

But it isn’t just about suppressing behavior — that in the end will not work. What needs to happen is to teach kids what to do instead. How to help them “vent” that anger in healthy ways.

One thing we don’t want to do is to teach our children that anger is bad, ask them to ignore their anger, suppress their anger, or avoid their anger.

We have to give them the tools to feel the anger and express their anger.

Interestingly, research suggests that angry venting, like punching a pillow, screaming into a pillow, or stomping your feet, is not effective and could be harmful.

On the other hand, non-violent venting in ways that releases the pent-up emotion, but that doesn’t enhance the negative emotion are ideal ways to help your child learn on to express their anger in appropriate ways.

When my son was about three-years-olds our go-to with tantrums and frustration was “throw away that angry ball.”  It wasn’t a violent act, it was simply throwing away the anger in the air and my son thought it was hilarious.

Silly venting can work with younger kids especially. Even something like stomping feet, as long as it is done in a silly way and not a violent way, can be helpful.

It works with older kids too. Now that my son is 7 when he gets really worked up he does the “running man,” which is literally running in place for a few minutes until the steam vents out and the laughing starts.

If you can release that temper, frustration, or anger by making them laugh, it has a two-fold effect. First, the anger dissipates and the laughter and silliness provide a natural stress release in the body.

Counting Down or Up

For younger children try counting up from four. There is a great Daniel Tiger episode and book that teaches this: “When you feel so mad that you want to roar, take a deep breath and count to four!”

With older children, you can count down from 10. Counting works because it engages the mind with something else and helps release the grip on the anger.

The other day I was stressed getting out the door for school– everything that could go wrong did and my son said — “Mama your steam tunnel is blocked, you better countdown!” I took his advice and indeed, it did work. Partly, because there was this little person being so rational, it had to work!

This can be combined with counting down described above. Breathing is such a great skill because it turns off the stress-response system in the body and turns on the rest-digest system, bringing calm from the inside out. The only way for this to really work is to teach your child mindful breathing outside of angry situations.

Other ways to get kids to take deeper breaths is to ask them to breathe like they are blowing bubbles, breathe out like a dragon, and blow out the birthday candle. My son literally breathes like he is releasing steam from a steam engine — but hey, it works!

Find these venting exercises and more in my new Anger Management Workbook for Kids. Print, laminate, and cut and add to your child’s time-in or calm down kit. Get your printable copy today!

Ultimately all emotions have a function. Frustration can bolster persistence, sadness can encourage withdrawal during a time your immune system may be compromised, and so on.

What is the function of anger? Protection. When we feel angry, we feel threatened and even possibly anxious.

Anger, literally defined, is “an unpleasant negative emotion accompanied by behaviors, sensations, and cognition, that motivate pre-emptive, or retaliatory action (4).” In other words,  you don’t care who or what is in your path — you simply want to lash out with anger.

Why would we ever feel like that? Most anger comes from feeling insecure or threatened. In young children especially, a surprising level of anger can be a response to something they viewed as unjust. Often times anxiety is intertwined with anger.

Once your child is calm and has had some time to recover talk about the situation. Was your child jealous? Anxious? Threatened? Once you have an idea of the root cause of the anger you can talk through that emotion. What was it that made them feel threatened or anxious?

Reading a book about anger, playing a game about anger, telling a story about a time you were angry and what you did are GREAT ways to teach children to understand and manage their own anger.

Books on jealousy, friendship troubles, or anxiety, can show kids that what they are feeling happens to other people. And it can also give them concrete examples of how to work through those feelings. If you child did lash out in anger, it is important to talk concretely about how they could have managed that anger through counting, breathing, etc. and then what they could have done instead to solve the problem.

Reading or hearing about other’s anger shows kids that they are not alone, not strange, and also gives examples of how other people worked through their anger. Below, (aff links) I listed some great books and games for understanding and managing anger. They are listed in order of age, so the books for younger children are listed first.

This anger management workbook includes 8 self-reflective exercises for kids to do with their parents, Mad-Power is a Super-Power word art mini-poster, and 7 healthy venting exercises for kids. Perfect to add to your child’s calm-down corner or time-in kit. Get your printable copy today!

The Best Educational STEM Gifts for Curious Kids
Next Post: Books About Life for 8 to 13-year-olds: Feelings, Friends, Worry, and More