Is Your Child a Dandelion, an Orchid, or a Tulip? Understanding Your Child’s Biological Sensitivity 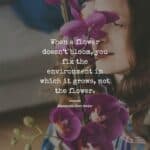 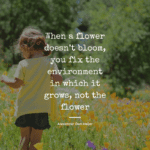 Inside: Children differ in how sensitive they are to their environment. New research shows that children can be reliably classified into three categories, the dandelion-resilient child, the orchid-sensitive child, and the mix of both, the tulip child. A 3-part action plan for parenting your sensitive child is included at the end of this article.

The first time I heard about “dandelion” and “orchid” children was at a child development conference over 15 years ago. I had wandered into a session on biological sensitivity to context. That sounds really complicated but it’s not — trust me and read on because I think it’s one of the most important things I think parents could ever hear.

Biological sensitivity to context is a new way of looking at nature and nurture, it’s not the old “is it your genes or is it your environment” debate, but rather how both nature (genes) and nurture (environment) work together to produce development.

The idea of biological sensitivity was first introduced by researcher Thomas Boyce and his Swedish colleagues. They used the analogy of flowers to explain this difference — some flowers are resilient and can thrive in almost any condition and other flowers need certain conditions to be able to thrive. In the original research they explained biological sensitivity with the terms “maskrosbarn” or a ‘‘dandelion child” and the “orkidebarn” a “orchid child (source).”

The Dandelion Child is Resilient

No matter the conditions surrounding dandelions they thrive. Dandelions even grow in-between cracks in a sidewalk!

Dandelion children are biologically resilient, their genes protect them from environmental threats. In some cases, these children grow up to be an inspiration, we wonder at their ability to thrive in spite of their circumstances.

At certain times of development, there is more sensitivity. For example, during the adolescent brain growth spurt, there is more vulnerability to addiction, mental health problems, and risk-taking behaviors. A dandelion child would be less sensitive than other children because they have genes that are protective against these threats. For example, there are some genes that predispose people to addiction and some genes that protect them. A dandelion child may have protective genes such that even with exposure to alcohol they are less likely to become addicted.

This doesn’t mean that dandelion children are immune to their environment, just that they have more genetic buffers.

The Orchid Child is Sensitive

Biologically, orchid children carry potential vulnerabilities in their genes. They are highly sensitive to their surroundings– diet, parenting, and toxins all have the potential to deeply affect the development of orchid children.

Orchid children can also thrive given the right context — just the right amount of sunlight, humidity, special food, and a regular schedule of watering, and orchids will bloom year-round.

Take the example of addiction in the teen years from above. An orchid child may have inherited a risky gene for addiction. If they are exposed to addictive substances without education and parent support, they may develop risky behaviors. However, they are also more affected by positive influences as well — so education and supportive parenting can serve as a strong buffer against environmental threats.

The Tulip Child is a Mix of Both Sensitive and Resilient

More recently, researchers (source) have identified a third type — the medium-sensitivity child that falls somewhere in between the dandelion and orchid child. The tulip child has a mixture of both remarkable resilience and sensitivity. ⁠

When looking at a large group of people, researchers have found (source) that highly sensitive people (orchids) make up about 31%, whereas the low-sensitive resilient group makes up 29% (dandelions), and the third group, the medium-sensitive groups makes up 40% (tulips).

It is probably the case that depending on what aspect of a person you are looking at — all of us have some biological sensitivities and all of us have some resiliencies. And it is also true that some of us, and our children, may be a little bit more sensitive than others.

The question is of course, how does this translate to parenting? What is it that orchid children or tulip children need exactly?

I think it helps to look at an example from a study led by my friend and fellow researcher Cathi Propper. In this study(source) we looked at how well babies regulated themselves biologically when separated from their mothers three times at 3 months old, 6 months old, and 12 months old. In a nutshell, we looked to see how well babies could handle stress.

We also looked at the genes that regulate dopamine in the brain. We know that people can have two versions of this dopamine gene (DRD2). The risky version (short allele) of the DRD2 gene is associated with impulse control disorders, aggression, ADHD, substance abuse problems, and an overall lower ability to handle stressful situations.

Babies who had the risky version of the dopamine gene showed less regulation (more stress). They didn’t do as well when mom left the room for a short time. This was true at 3, 6, and 12 months UNLESS those babies also had mothers who were rated as highly warm and sensitive in their responses to their child. In that case, once those babies reached 12 months of age they had regulation similar to babies without the risky dopamine gene.

So, orchid babies in this example were at risk for lower regulation and more stress. We know regulation is important for all kinds of success later on (see my post on regulation here). But with the right environment, those babies could develop good regulation and thrive.

These findings are amazing. They show that sensitive and warm parenting can protect our children from their own genetic inheritance. Perhaps they are born with risks, but those risks are not a sure thing. And especially for children at risk, the environment and parenting have an even greater effect.

So what does this mean for us in our everyday parenting?

We don’t know if our kids have a risky version of a gene or not. And in reality, a child may have a risky gene in one area, but resilient genes in several other areas.

Most children won’t fit into the dandelion or orchid categories neatly — instead, they may be a mix of both — a tulip. You probably see some areas where your child is likely more sensitive and need extra special care from you and other areas in which they thrive seemingly without needing a thing from you.

1. All children are unique and therefore “good” parenting will look different for different children.

There is an infinite number of ways to be a sensitive and responsive parent and we are all just doing what we think our kids need from us.

What our child needs can vary so much from what other children need given any situation. So stop falling into the comparison cycle and trust your instincts that you know your child best.

Also, be open to learning as you go along. Each new stage of development in your child brings new parenting challenges. I don’t always know how to parent the “best” way until I’ve lived in that stage a while.

2. Sensitive and warm parenting matters — it has the power to buffer environmental threats.

It matters a whole heck of a lot, especially to more sensitive children. It can literally change the expression of certain genes.  I bet most children have at least some qualities in them that are orchid qualities and they need us to be positive, sensitive, and responsive to their needs.

What we do makes a real difference. Now, don’t get me wrong, we don’t need to be perfect parents, no one can be. But what we can do is fill up our parenting toolbox (here are some ideas 1, 2, 3)  so we have strategies to deal with the times and behaviors that we find challenging as parents.

Three Quick Strategies to Help Kids Work Through Big Emotions
Next Post: How to Get Your Toddler to Listen and Cooperate