Teach Your Kids To Manage Their Own Screen Time 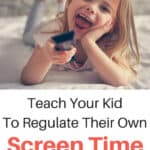 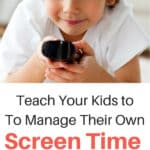 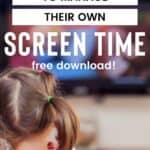 Inside: Teach your child how to set screen time limits and manage it themselves with a TV token choice system.

Our children are digital natives. They were born into a world of instant downloads and touchscreens. Into a world where screens on a refrigerator are no big deal. As parents, the question is how much screen time is too much and how soon is too soon?

There are all kinds of ways to limit screen time from completely abstaining to not putting limits on at all.

Honestly, both of those strategies have merits. And depending on the season, my son’s age, and what else we have going on in our life — I have done both. We have had periods where limits have been extremely lax and periods that were completely screen-free.

I think that having variability is actually healthy. To live in a world with screens is too delve into them unabated and to take breaks.

But, here is the key piece: We must teach our digital natives how to be responsible and learn how to regulate screen time themselves.

One day, they will be grown up and they have to be able to decide whether to play one more video game or to turn it off and study. Or maybe even socialize. Or eat!

This is the strategy I used with my son when he was a toddler and preschooler. We have had our tech battles for sure. And now, at age 7, I see a growing sense of responsibility and regulation when it comes to tech use. I don’t have to argue with him to “turn it off,” nearly as much.

I think a lot of that growth came with having to take responsibility for being in control of his screen time at an early age.

Why learning to self-regulate screen time is so important:

In a series of three studies, Lillard et al. tested children’s self-control abilities in series of tasks after showing them either a fast-paced unrealistic show (Sponge Bob Squarepants & Fan Boy and Chum Chum) or after watching a slow-paced realistic show (Arthur) or engaging in free play activities or book reading. Children who played or read a book scored significantly higher on self-control tasks than children who watched a TV show.

So what does all this mean for my child and limiting screen time?

1. Reading books and playing is superior from cognitive development than watching TV– (Duh!)

But here is what is so interesting, when children watch fast-paced unrealistic television they are less regulated than when watching a slow-paced realistic show.

I’ll also guess that watching too much TV, regardless of what kind it is, leads to less regulation. Have you ever noticed that? That your child acts more out of control after a TV session? That’s direct evidence of TV viewing affecting EF skills.

It is likely that the loss of EF is temporary– but what is yet unknown is how much is too much and what would affect the brain over time. Some screen time is most likely fine for children over the age of two. Honestly, the question of how much is too much has not been answered and it probably depends on individual children’s sensitivities. But what is known is that we need some limits on screen time.

Screens are new to us in terms of evolution– the brain doesn’t expect it. Thus, the brain develops changes to accommodate this new experience (see also Nurture Your Child’s Brain). One way it does this is by rewiring itself to follow the quick scene changes on TV shows or in video games. There are some studies showing that exposure to TV and video games over time can lead to attention problems.

It is hard for adults  (much less, children!) to regulate their own screen time. The fast-paced, instant reward methodology of TV shows and video games play right into the brain’s reward centers. We have to help our kids learn to recognize this and regulate it like we would any kind of substance that would affect the brain.

How to Use TV Tokens: Put the Power to Turn it Off in Their Hands (within your limits)

You’ve probably seen TV tokens before — maybe you have used them before. As something your child earns, or maybe as a reward. There is a different way to use them that can empower kids to take charge of their screen time. Here’s how to do it…

Here is an example of what you could say:

“Lately you and I have been arguing about watching TV, haven’t we? I don’t like to argue with you. But you like to watch shows sometimes don’t you? I have a special tool that puts you in charge. Here are two tokens, one token is good for one show. You can choose any of these favorite shows to watch with one token. When you want to watch a show, bring me a token. Once you use both tokens that is all of the TV for today. Tomorrow you get two tokens again! Do you want to try it?”

Sibling Adaption: A reader wrote in with this great idea. In her house, each child gets one token a day and one 20-minute tablet token each. She says it has virtually eliminated all the arguing about which show to watch. Again, she has a list of favorite shows that are appropriate for even the youngest kids and the older kids get to do more challenging games during their tablet time.

You can also choose to limit when the tokens can be used — like not until after lunch or after preschool.

These tokens are not rewards. Technology is plenty rewarding in and of itself. Rather they are simply to help your child remember how much TV they have watched.

This is a great example of giving your child power and choice within a boundary (a hallmark of authoritative parenting). The tokens are not rewards, they are simply there as a limit — as a guide.

Your child can choose when and which one they want to use. When the tokens are gone, they’re gone. Every day the tokens reset.

They aren’t taken away as punishment, nor are they given as rewards. They are simply a tool your child can use to regulate their own screen time.

My son got two tokens for TV shows and one iPad token per day. He could use them whenever he wants (within reason) and when they were used there was no more screen time that day. For us, each token was good for a 20-30 minute show and the iPad token is good for 15 minutes. That means on average my son is getting an hour or less of TV per day. Today, for example, he only used the 15-minute iPad token.

All of our power struggles and negotiations stopped completely when we instituted this when my son was younger. When the tokens are gone, they’re gone. He did suggest a few times that I could make more tokens, but I simply explain the reasoning to him– too much TV isn’t good and the tokens help us remember how much he has watched.

I also love the fact that the tokens are not rewards. Just like saying “no dessert until you finish all of your dinner” can create unhealthy associations with sweets (e.g., when I feel bad I eat sweets), making technology the reward, “you can’t watch TV until you read a book” could create the same kinds of problems. Why is TV the reward and reading the requirement here?

If I value TV and screentime above reading in a reward system, then my son will internalize those values too.

Having tokens that are just a tool (not rewards or things to take away) is a way to empower kids to be in charge of their own screen time.

It’s undeniable that technology has benefits– research has shown that children over the age of two can learn from TV.

I think it is especially useful for supporting second language development, especially when only one member of the immediate family speaks that language.

And let’s not forget that for better or worse TV gives us a break– it’s a digital babysitter. Allows us to get something done.

So, I think it is best to have technology in our lives but do so consciously with a plan and a way to regulate it. I hope this simple tip helps you do just that!

And just for fun, I created a free printable with two TV tokens and one iPad token. Printable version here: SCREEN TIME TOKENS

3-Step Positive Parenting System: Respond instead of Reacting to Your Child
Next Post:7 Heart-Warming Ways to Track Your Child’s Growth and Development from Kindergarten to 12th Grade